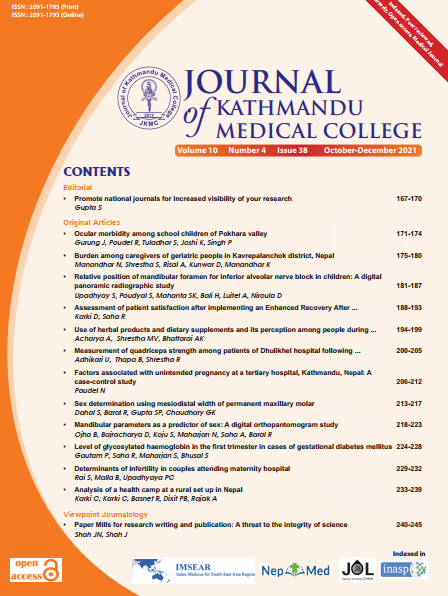 Background: Infertility is defined as not being able to conceive after one year or longer period of regular unprotected sex. Infertility is an experience that not only strikes at the very core of a couple’s life but also the whole family and society.

Objectives: This study was aimed to establish the various determinants inclusive of diverse male and female factors that are responsible in causing primary or secondary infertility.

Methods: A descriptive cross-sectional study was conducted after ethical approval among 448 couples attending infertility clinic in a Tertiary Care Maternity Hospital from 16th July 2018 to 15th July 2019. Convenient sampling was done. All infertile couples who visited hospital’s infertility clinic during the study period were included in the study. Clinicodemographic and diagnostics details were recorded and analysed using SPSS 20.

Results: Majority of the couples had primary infertility (326, 74.4%). Mean age of the females was 28.08 ± 5.23 years and males was 31 ± 5.7 years. Most of the infertile couples had unexplained infertility followed by female and male factor. Most common female contributing factors was tubal factor (45, 35.16%), followed by ovarian factor (41, 32.2%). Only 104 (23.6%) of the semen analysis had abnormal result among which most common findings was asthenozoospermia.

Conclusion: Primary infertility is more common than secondary infertility. Tubal factor was the most common female contributory factor while asthenozoospermia was predominantly seen among male partners with abnormal semen analysis.

You may also start an advanced similarity search for this article.